Bone Broth – How to make it and why it’s better than Tums for acid reflux and digestion. 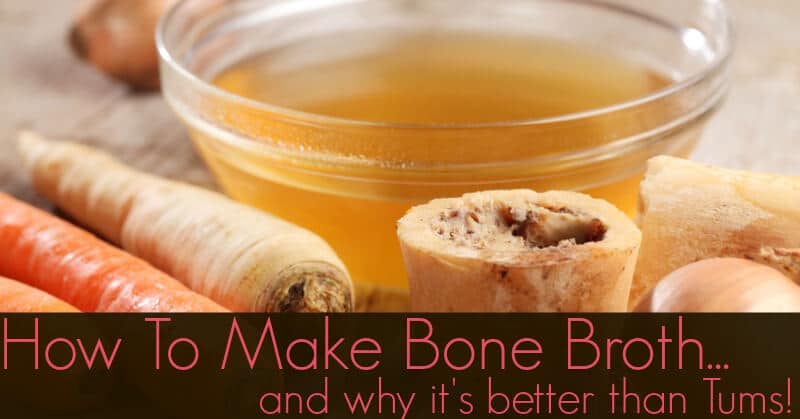 Not too long ago I walked into a large chain grocery supermarket. I wanted to see what they had to offer for soups. Here is what I found:

Adjacent to that was this:

I counted over 90 varieties of Campbell’s soups and over 70 varieties of Progresso. That’s 160 soups from just two companies! Combined they accounted for over 95% of the choices.

But this is not the made-from-scratch, nourishing, immune-boosting soups that our grandmothers (or maybe great grandmothers) made.

The Benefits of Bone Broths

Bone broths are an essential part of almost every traditional culture on this planet. They form the foundation of staples such as soups, stews, gravies, curries, tagines, bouillabaisses, cioppinos and gumbos, to name a few. They’ve been used for centuries for their restorative, immune and digestive-boosting power.

Basically, broths are simply animal bones that are simmered in water for long periods. Chicken, beef and fish bones are used in the most common broths. This withdraws the nutrients from the bones, in particular, the minerals and presents them in a highly absorbable and thus digestible form. Most people are aware that a good broth is rich in minerals.

But a good broth will contain more than just bones. Knuckles, joints, feet, skin, cartilage and tendons attached to bones are often part of a broth as well. Many of these fibrous tissues are composed of a highly dense network of proteins known as collagen. Collagen is only found in animal sources in Nature. The proteins in collagen also break down in a good bone broth and reassemble themselves into the strong but pliable tissues in our body such as our joints, skin and nails. In fact, you may have heard of two such components of collagen, glucosamine and chondroitin sulfates which are sold as supplements for those with joint problems such as osteoarthritis.

Why Broths are Better than Tums

This may sound a little odd if you’ve ever experienced heartburn (the burning sensation of stomach acid refluxing into the esophagus) or if you’ve been diagnosed with chronic acid reflux which is known as GERD (gastro-esophageal reflux disease). After all, when was the last time you heard a doctor recommend bone broths for acid reflux? Homemade broths are an essential part of my 3-step plan to stop heartburn in my new e-book, The 30 Day Heartburn Solution: A 3-Step Nutrition Program to Stop Acid Reflux Without Drugs.

The 30 Day Heartburn Solution: A 3-Step Nutrition Program to Stop Acid Reflux Without Drugs Instead you’ll more than likely be told your stomach is producing too much acid and be sent home with a drug and a few lame suggestions to help you manage your heartburn such as avoiding your triggers (no duh!), reducing your stress (though they don’t tell you how), not overeating (which you do when you’re stressed) and reducing your intake of fat (which makes you crave sugar and junk food, especially if you’re stressed).

But nothing and I mean nothing makes me roll my eyes and shake my head in disbelief more than when I hear doctors prescribing Tums for both acid reflux AND osteoporosis.

Tums active ingredient is calcium carbonate. Calcium carbonate alkalinizes the stomach acid for a brief period and thus knocks out an episode of heartburn. Because calcium is also important for bone health, the thinking goes that by taking Tums you can also use it as a calcium supplement.

Have you ever looked at what else is in Tums besides calcium carbonate?

Basically, chemicals (some of which contain GMOs). Sucrose and corn starch are genetically modified. Mineral oil is a byproduct of petroleum. Natural flavors means artificial flavors. Adipic acid is used to make nylon. Sodium polyphosphate is used to make detergents. And the four dyes at the end are associated with neurological issues.

Joking aside, the crazy irony in this is that we need stomach acid to help break down and absorb nutrients in food, in particular our vitamins and minerals. Your stomach’s primary role is like a blender and what drives that blender speed is stomach acid. Chronically lowering stomach acid is like lowering the speed of the blender. This sets the stage for nutrient deficiencies (and further digestive problems).

Sure enough, one of the side effects of taking acid-reducing medications over the long term is deficiencies in vitamin B12, calcium, magnesium, iron, zinc, all of which support bone health.

Just listen closely the next time a commercial for an acid blocker like Nexium (aka the purple pill), comes on your television. Considering how bombarded we are with ads for heartburn meds, this shouldn’t take too long. Big Pharma spends millions on advertising for heartburn meds because they rake in billions in profits. Anyway, one of the side effects mentioned is an increased risk of bone fractures. This is a direct result of not properly breaking down minerals as a result of lowered stomach acid.

Furthermore, though heartburn medications stop the sensation of heartburn, they don’t permanently stop it. This is why people become dependent on those meds. As soon as they stop taking them, heartburn comes raging back.

This is why that, contrary to popular belief, acid reflux is NOT caused by the over production of stomach acid. But that’s a bit of tangent than what I want to discuss today.

The somewhat long-winded point I’m trying to make is that consuming homemade soups from homemade bone broths is a fantastic way to normalize digestive health AND boost your intake of minerals. And SO MUCH BETTER than taking Tums or any other digestive med.

Of course, the benefits of broths go way beyond just minerals. Let’s take a look at one more key component of homemade broths before we get to a recipe.

Gelatin is not just for Jello

Another component of collagen is gelatin. Gelatin is a waxy substance that forms when broths cool. It’s the key ingredient that give Jello its jelly-like consistency. Gelatin has been prized for centuries by cultures around the world for its numerous health benefits, in particular its ability to help ease gastrointestinal discomfort.

Nutritionist Kaayla Daniel in her article entitled, “Why Broth is Beautiful”, discusses the role gelatin played in the medical profession in the first part of the 20 century. She cites numerous researchers that studied its benefits and doctors that used it therapeutically with patients for an assortment of digestive problems including bacterial infections, inflammation, IBS and dysbiosis.

In particular, Dr. Daniels quotes the research of Dr. Francis Pottenger, who in 1937 said, “Gelatin may be used in conjunction with almost any diet that the clinician feels is indicated. Its colloidal properties aid the digestion of any foods which cause the patient to suffer from ‘sour stomach.’”

Dr. Daniels cites another researcher who in 1872 who “found that gelatin improved digestion because of its ability to normalize cases of both hydrochloric acid deficiencies and excesses, and was said to belong in the class of ‘peptogenic’ substances that favor the flow of gastric juices, thus promoting digestion.”

Dr. Daniel’s article is one of the best I’ve encountered on the health benefits of broth. Be sure to check it out here for a more in depth look:

How to Make a Gelatinous Bone Broth

A sign of a good broth is how well it gels due to the gelatin. Upon cooling the broth should giggle like Jello. Admittedly, I haven’t always been successful at this. In fact, more often than not, I don’t get much gelatin in my broths. 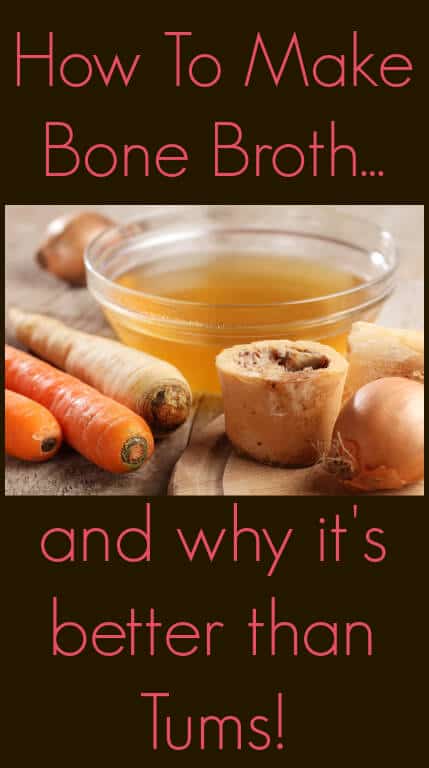 This is due to a few reasons that I’m learning. First, I’ve added way too much water in the past. Too much water will dilute the gelatin. A good rule of thumb is about one to one and a half pounds of bones per quart of water.

Second, boiling broths can also prevent gelatin from forming. Instead, they should be simmered at a very low temperature. A good gauge of a good simmer is a few bubbles rising to the surface here and there. Even a rolling boil is too high of a temperature. If you’re cooking on a stove top that would mean a fairly low setting – medium low to low. If you’re cooking with a crockpot that would also mean a very low setting. My crockpot’s lowest setting is actually too high and that’s been part of my problem. Yeah, I really need a new crockpot.

For me, I’ve had the most success forming gelatin with beef stocks. That’s probably because beef bones are thicker and contain more collagen than say fish or chicken bones.

Now if you can’t get a good variety of bones, don’t stress it. Any bones will do but do try to get the best quality bones you can from grass-fed sources. Work with what you have and what you can get. They will still impart valuable minerals and nutrients. If your stock doesn’t gel well it’ll still be a million times better than buying Campbell’s or Progresso soup or god forbid those little bouillon cubes that have just as many toxic ingredients as canned soups.

The great thing about broths is that you can always spice them up after the fact. Some folks even prefer blander broths for that reason.

So on that note, what follows is my basic recipe for beef stock from my new e-book. And if you or someone you know suffers from chronic heartburn or GERD, has been told they have to take acid blockers permanently or just constantly walks around with a bottle of Tums, I’m confident you’ll find a REAL solution using REAL food right here.

Craig Fear is a certified Nutritional Therapy Practitioner. He opened Pioneer Valley Nutritional Therapy in Northampton, Massachusetts in 2009 and started his blog, Fearless Eating in 2011. You can also find Fearless Eating on Facebook, Pinterest and Google +. He specializes in digestive issues and works with clients both over the phone and in person. The foundation of his practice is helping his clients transition to a nutrient-dense, traditional foods diet. He has just released a new ebook, The 30 Day Heartburn Solution: A Three-Step Program to Stop Acid Reflux Without Drugs. Craig’s interests include hiking, playing guitar, spending time with Lipton (his roommate’s golden retriever), meditation, rooting for his beloved New York Giants, travel, and writing and blogging about nutrition. He also loves coffee and is only mildly addicted to it.

I’m a mama of three beautiful coconuts and they are the reason I named my website, The Coconut Mama. I’m passionate about traditional and healing foods. As a true believer in the health benefits of coconut, I use coconut products in all my recipes. I share my tutorials and recipes on my site with the hope of helping others to live healthier lives – with coconut! 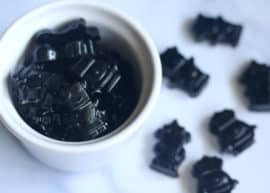 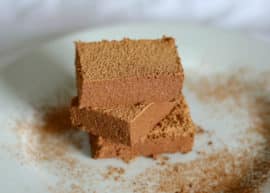 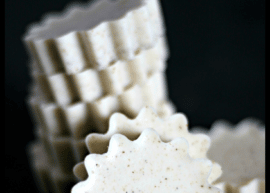